First thing, first, thank you to everyone who has already pre-ordered Undeliverable, you’re my hero! We made our goal in the first 16 days of the campaign, which will let me get the book professionally formatted into an ebook. This also means that everyone who donates to the campaign, for any amount, will get a free ebook. $1, $5, whatever you want to contribute, I’ll be sending out ebooks just as soon as they’re ready!

But Halloween was this week, and we’ve celebrated the first milestone in the campaign, but here’s where things start to get really fun.

If we can manage to reach $3,000 by the end of November, I’ll be able to afford to do an audiobook of Undeliverable, as well as pay to have Thea of Oz turned into a well-formatted ebook. For you guys, it means that if I make it there, you’ll get free Thea of Oz ebooks as well as free Undeliverable ebooks, regardless of your donation level, so get to sharing this campaign with your friends! Also share it to help you win yourself some signed artwork, it’s beautiful.

It’s also worth mentioning that my birthday is coming up and, if you were feeling so generous, you might make a birthday present out of your donation…

This entry was posted in Publishing and tagged crowd-funded publishing, Undeliverable.

Pre-order your copy of Undeliverable!

So, this weekend, I launched the pre-order campaign for my novel, Undeliverable! It is nerve-wracking to be sure, but I promise to keep the updates to a minimum and only let you know when the truly exciting things are happening. As for the five people who have already donated (Chris, Joanna, Susan, Fritz, and Noah), thank you so, so much!

The goal of this campaign is to raise enough money mainly to market the book. Spots in the Kirkus Review are not cheap, nor is professional conversion to e-book formats. Thus, I come to you, dear readers, hoping that you can chip and help defray those costs!

The campaign is running for the next month, so, even if you can’t place your order now, maybe you can place it as a birthday present to me on November 21st!

This entry was posted in Publishing and tagged crowd-funded publishing, Indiegogo, pre-order, Undeliverable.

Pros and Cons of Different Types of Publishing

So, as I’ve been contemplating the whole “how do I get myself published” question, I have had to come up against the hard realities of the world and how it views the different tracks publishing can take. I am going to take a little bit of time here and spell out how I see the breakdown of possible publishing avenues, starting with the least respectable to the most respectable. I’m hoping this can answer any questions about why I choose to go the route that I choose.

Self-Publishing
This is the term you don’t want to hear from the mouths of your friends. “Hey, Rebecca, my uncle self-published his memoir and you like books, you should totally buy a copy to help him out!” What this translates to is an unedited mass of papers, spiral or tape bound at Kinkos, with a cover they hand-drew, unedited, full of the kinds of sentences that will make you cry and curse the world. They probably never read it through twice, or even if they did, they decided it was perfect (its not) and think the whole world should think its perfect and don’t understand why the world refuses to acknowledge their greatness with a listing on the NY Times Bestseller list.
Rights you retain: All
Royalty: Anything above printing cost
Distribution: Wherever you can convince to carry it
Cost: Entirely out of pocket, spread out over time
Production value: Low

Vanity Press Publishing
This is slightly better than pure self-publishing. I highly doubt that its been edited, but at least it looks slightly better. It at least looks like a real book. In fact, they may have had a house designer and proof reader go over it (for a fee, usually three times higher than a freelancer could have given you). However, to get it out in the world, you had to pay for every copy up front from a company that really doesn’t care if you succeed or not. So now you have the 5,000 copies you were forced to pay for and no real idea what to do with them. Or you’ve read all the blogs online about how to market them, but you spent all your money getting them printed, so now you can’t afford even a minor marketing scheme.
Rights you retain: All
Royalty: Anything above printing and setup cost. The setup cost can be several thousand dollars
Distribution: Wherever you can convince to carry it
Cost: Entirely out of pocket, large chunk upfront and then printing costs
Production value: moderate

Crowd-Funded Publishing
Here’s where things start to get interesting. This is a recent development, what with Kickstarter and Indiegogo. Here, you can reach a wide audience and they can verify that your work has merit, and help fund its launch. Now, you are no longer responsible for bearing the entire burden of the price of editors, designers, and marketing and you can approach the level of production a publishing house could offer. If you’re diligent and internet savvy, you could have the production budget of one of the biggest houses and produce books of verifiable quality. And, with the advent of CreateSpace and Lulu, you need not print anything to have on hand if you don’t want to and can handle all the sales through Amazon, which will also distribute to regular bookstores.
Rights you retain: All
Royalty: Anything above printing cost
Cost: Only what it takes to set up your campaign, be it videographers or what have you.
Distribution: Amazon and the like as well as book store distribution channels
Production value: moderate to high, depending on who you have design it and where you have it printed. Independent House Publishing
This is getting into the commonly considered ‘respectable’ range. Here, an editor has vetted your work and you’re considered publishable (ie saleable) material. The good part about this is all the copyediting/design/layout and a good deal of the marketing is handled by the house. Which frees you up to be writing your next book. Unfortunately, they’re a small house and can’t afford much in the way of marketing, and probably have a small circulation, unless they’re something like McSweeney’s
Rights you retain: A good majority
Royalty: About 15% of the cover price
Cost: none
Distribution: All Internet and traditional store distribution
Production value: moderate to high, depending on how big the press is. Traditional House Publishing
Here is where all the reputation is. Get with Knopf or Penguin or Random House and you’re considered golden. But are you? Sure, they’ll woo you and promise the moon, but they’ll insist on new untested writers giving up way more of their rights than they probably want to and, again as a newb, unless they think you’re the one in a million rising stars, then they’re going to give you virtually no marketing money. They count on your using your advance to do it all on your own. Remember, they’re putting out hundreds of books a year, your’s is only one of them.
Rights you retain: Less than you’re comfortable with
Royalty: as a newb, maybe 10%
Cost: none
Distribution: All Internet and traditional store distribution
Production value: Usually pretty excellent 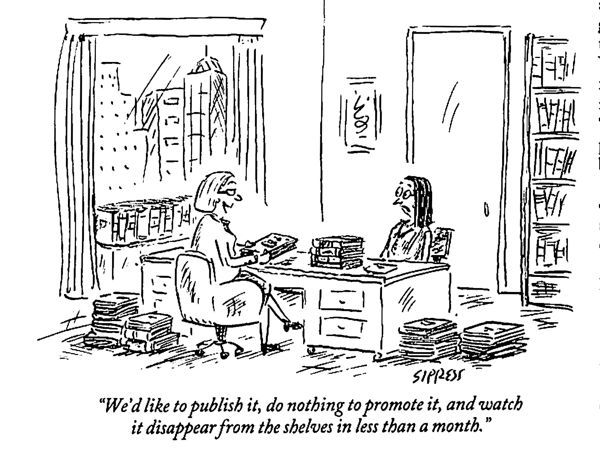 Given all of this, I personally would feel much more comfortable an Indie press or going with the crowd-funded option. Either way, I know I’m going to be producing quality. And with the crowd-funded option, I actually get to keep all the rights myself and get a much more vast royalty than I would with a house. BUT what I am giving up is the experience, connections, and reputation of a house publication.  And that’s a hard pill to swallow. Now, I have not yet given up on the possibility of a house deciding I’m worth their time, but I have also come to the decision that crowd-funding the book is just about as good. I can raise the money to do a proper edit and copyedit of the work, and, if I hadn’t been so design-orientated myself, I could hire a decent designer. And then, I can pay for a decent marketing campaign to try and get it into as many readers hands as possible.

And now you know where I stand on all this. Now, if Random House turned around tomorrow and promised me the moon, I’d have a damn hard time turning them down, because, let’s face it, who wouldn’t want that sort of reputation boost? But I would have to sit down and seriously consider all of my options before accepting a steep drop in royalties and the loss of control over a lot of my rights.

Jane Friedman also recently explored this topic in a slightly different manner, and I’ve included her infographic below. 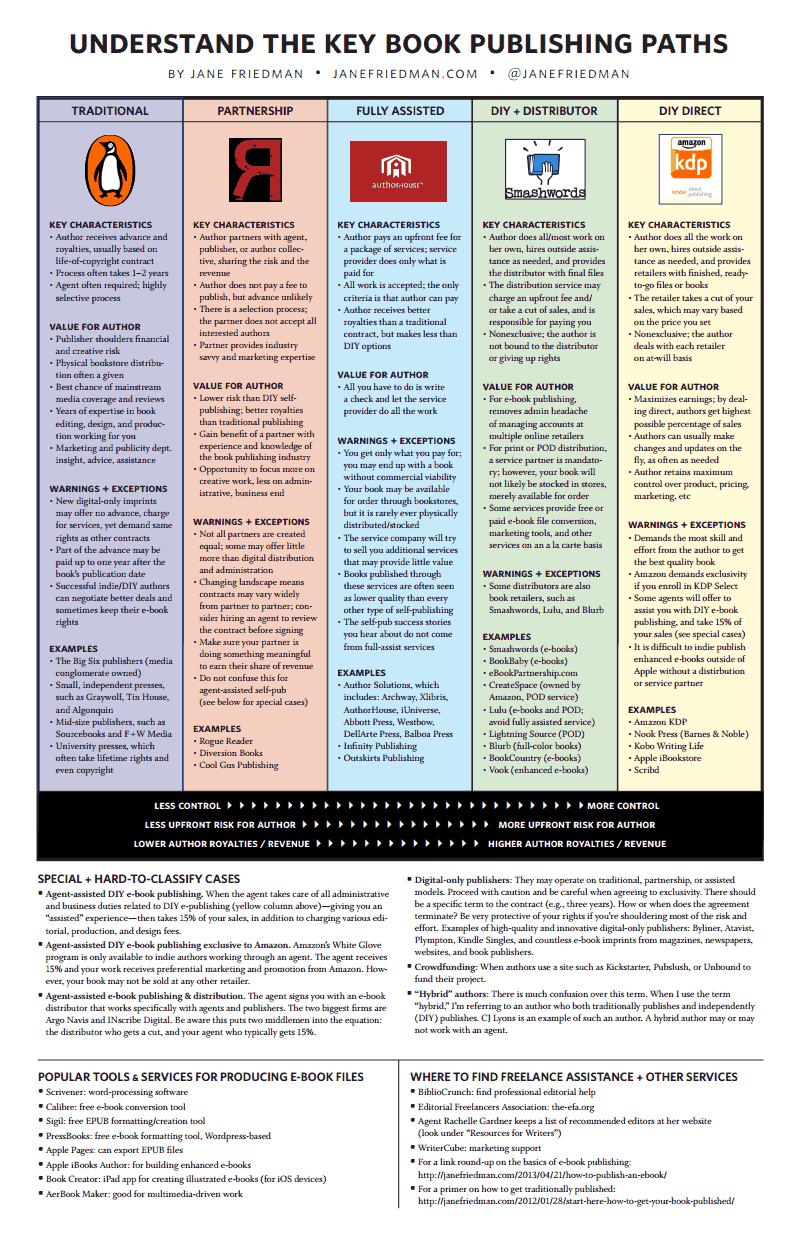