Janet Evanovich has done it again. Takedown Twenty is a thoroughly entertaining and brilliantly funny slap-dash adventure featuring Stephanie Plum. In this installment of this comedy of errors, Stephanie is tasked with bringing down a popular figure in Trenton, even though everyone knows he’s a wet work guy. They all still view him as the lovable old man. 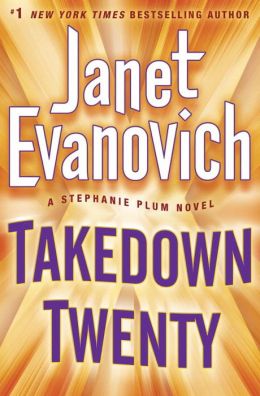 Evanovich had a bit of a slump a few books ago where they felt rushed and tired, but she’s back to full form with this book and if you’re looking for a slapstick comedy with an engaging plot, this is definitely your kind of read. My only complaint with her novels, as I stated in my last post, is that her characters never grow or change. Stephanie is in her same poorly decorated apartment, she still can’t decide between two gorgeous men, and she is still making a hash out of both her work and social life. This book is only for those who would like a bit of fun without anything heavy getting in the way.

Janet Evanovich is another author I can reliably go to for a popcorn quality read. Her books are fluff and air, but fun from start to finish. And just recently, her eighteenth book in the Stephanie Plum series hit the shelves.

Explosive Eighteen is the most recent in a long line of ridiculous bounty hunter fun. Stephanie just can’t do anything right and this time is no exception. When the book starts, apparently something fight-like happened between her two long-time lovers in Hawaii and she has accidentally become the target of several head hunters. Literally, they’re ready to scalp someone for the information they are after.

I had been worried after the last couple of Plum novels as Evanovich’s writing seemed to be flagging, almost as if she were tired of the characters and the style, but she has recovered in this one. She is back to her funny and devil-may-care self. You’ll never catch me saying she is high literature, by any means, but for an entertaining afternoon, she’s perfect. (Literally, afternoon. I think it took me three hours total.)

Anyway, not much more can be said about entertaining fluff books (literally, it’s like eating spoonfuls of Marshmallow Fluff–empty calories, guilt-inducing, yet somehow utterly satisfying) but I’ll take a moment here to address the movie adaptation of her first Plum novel while I’m here.

So, the first worry with movies like this, for me at any rate, isn’t the writing. It’s the casting. After 17 books worth of living with these characters, I have very particular images of what some of these people look like (particularly the hotties…). I have to say, the casting of Stephanie, Morelli, and Ranger were all spot on. They were absolutely perfect. The two I was a little unhappy with were Grandma Mazur and Lula. I really really wanted Betty White for Grandma Mazur and someone like Queen Latifah for Lula.

Seriously though, wouldn’t that have been wonderful?

And I do have to say one thing about the writing. It stuck wonderfully close to the novel, but that is actually its downfall. The transitions from scene to scene were rather abrupt and awkward and it took me a moment to realize that this was entirely because whoever the screen adapter was didn’t bother to make it screen friendly. They basically just turned the novel into dialogue but forgot to translate it for screen. The same devices and lines that work perfectly well on the page often look stiff and awkward on the screen. Something to keep in mind, aspiring screenwriters. It has to look and sound authentic when someone actually says it.