Watercress vs. Crescent – Neither are Rapunzel

is well launched, and the rush of promotional blog things are somewhat out of the way, I can get back to doing what I do best: writing and talking about books. So, what have I been reading while I’ve been trying desperately NOT to think of sales numbers?

Well, I have been indulging in a bit of YA Fantasy, thanks for asking. My copy of Cress

finally arrived and I devoured it, just like any good salad…I mean story. This is the third installment of Marissa Meyer‘s Lunar Chronicles, and, as my roommate and boyfriend will attest, I was put-out when I hit the end of the book, to put it mildly. The first three books are 1500 pages to set up for a revolution, and by the time you hit the end of the Cress, the revolution is hardly a sneeze away from starting. And now I have to wait another year until I’ll get to read Winter. Write faster, Marissa, write faster! 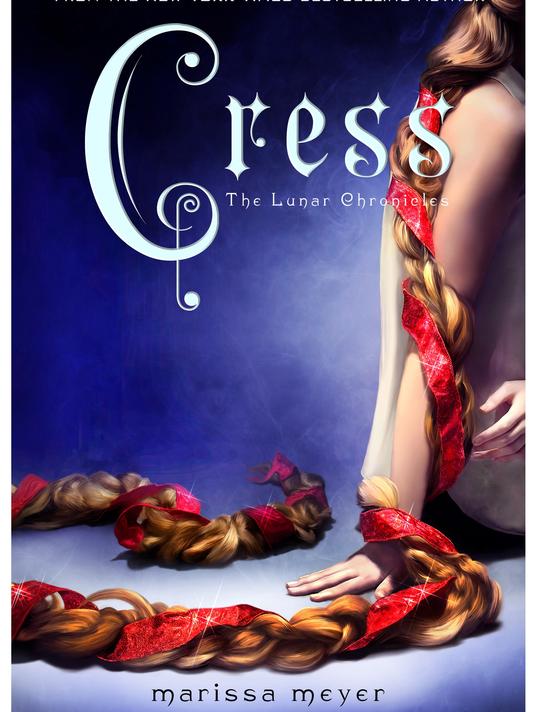 If you couldn’t already tell, I rather liked this one. I feel like her writing has matured a little bit over the last three books, and she isn’t trying as hard to force the fairy tale to fit. The fairy tale storyline more effortlessly overlays the science-fiction world, with characters that really draw you in. That being said, the story jumps from person to person to person, trying to give us the entire scope of the revolution, which was at times frustrating when I just wanted to follow one of the groups for a little while. At no point was I actually confused by the jumps, I just wished we weren’t following so many different ones. That should be well resolved when we start the third book as we’re now down to just two different groups of heroes to follow.

Overall, I highly recommend this author to anyone who enjoys YA fantasy and sci-fi, as it straddle that genre line, just like Star Wars, with almost as much political intrigue. They are well written, unlike certain OTHER YA which I will not mention in this post, and actually do a good job of character and plot development. Now excuse me while I go hold my breath for the final installment…

A while ago I heard about the Lunar Chronicles by Marissa Meyer, a series of science fiction books geared for young adults that take and twist a few of the common fairy tales on their head. The first is Cinder which follows a young earth cyborg who lost a few limbs in a car accident when she was young. She lives with her foster mother and foster sisters and generally has a crappy life, until the prince shows up in her workshop one day with an android for her to fix. The second book is Scarlet, which follows a young woman from the farmlands as she’s catapulted from her normal sleepy life to rebel by the disappearance of her grandmother.

If you can’t tell, these two books twist the Cinderella and Red Riding Hood fairy tales onto their heads and create a new, and fun, environment for these characters to play in. I was pleasantly surprised when I cracked these open to find that the writing is actually excellent. After Twilight and some of the other pieces of trash writing that have become popular, the Lunar Chronicles are witty, well structured, and definitely designed to lure a younger audience into a fun reading adventure. When Cinder ends, you cannot wait to get your hands on Scarlet. And when Scarlet ends, its just not fair because Cress, the third installment, doesn’t come out for a long time yet.

The only drawback I find to these stories, at all, was the fact that it feels like Meyer had this great idea for reinterpreting fairy tales, but then when she actually got started on the project, the story got away from her and become something much more, and very different from, these fairytales. I kind of wish she had done away entirely with the overt references to the tales in the name and everything, and had let the fairy tale element become background, subtle details that only an observant reader would catch. It would have made the influence of the tales a flavor rather than an identity that just doesn’t quite fit them anymore. Overall though, I would highly recommend these to anyone who enjoys a fast-paced science fiction/fantasy with strong female characters. This is one series I am glad it is selling as well as it is and am happy to throw my support behind.